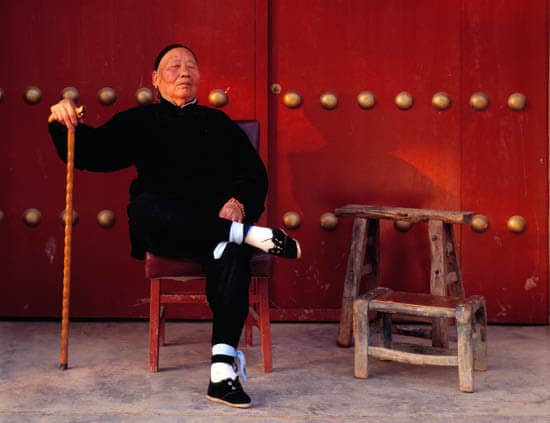 Photographing people in countries and cultures other than the one in which I was born and raised, demands that I approach the work with an eye open for acceptance. Avoiding the narrow lens of judgment is crucial. What results is a gateway to beauty; not the shallow kind that comes from cosmetics, but profound portraits of beauty as dignity, sweet pride, fierce independence, soulful surrender, unfathomable resilience, and more.

For some time I had wanted to travel to China to make photographs and hear the stories of the last generation of women who have undergone foot binding. What began as an esteemed ritual for wealthy women—proving that even hobbled, they had an elevated status and could have others deal with mundane household tasks, etc—was to me, a mystery. Women, their families, and their husbands took great pride in tiny feet, with the ideal length, referred to as the “Golden Lotus” measuring about 3 Chinese inches.

This practice of foot binding later saturated the lower classes. The process was grueling and Li, the woman in this image, remembered being unable to walk for a full winter. The binding was an essential part of her life, she told me. Looking back, Li, who was a 93-year-old great grandmother, was proud of her 3” golden lotus feet and of her life. She had a wonderful husband and 7 children; she told me none of this would be possible if she hadn’t had her feet bound.

It struck me that although rituals shouldn’t be forced on anyone, it’s a harsh reality that they happened—and perhaps too, that society weighs consciously and unconsciously on our behavior. When people comment negatively about the Chinese practice of binding feet, I think of women and men in the West—in tanning booths, piercing their bodies, removing ribs to appear thinner, undergoing plastic surgery, getting tattoos, straightening teeth, etc —all for beauty.

The women who have undergone the binding of feet came from different classes and family backgrounds. Their experiences and feelings ranged from pride to resentment and anger. Li was among the last generation to live out one of China’s most ancient and widely practiced customs.

Without judgment, I appreciate Li’s esteem she carried, greatly because of her tiny feet. Like anything, perception is reality. An image can be presented to enlighten. It is left to the viewer to form conclusions and for a photographer like me to soldier on, exploring the endless curiosities presented by the world and its people.